Anger is something everyone experiences from time to time and is often based on “surprises” perceived as negative. We all have expectations which develop based on life experiences. When those expectations are violated either positive or negative emotions are evoked. For example, a surprise birthday party will most likely make the person feel excited and happy. On the other hand, a flat tire will frustrate people. Cortisol and norepinephrine are released into the system to help the body focus and resolve the stressful event. When the stressful event is not resolved anger can build.

When a person is “flooded” with anger it hijacks their frontal cortex (which is responsible for decision making and cognitive empathy) making it impossible to communicate effectively. When people make decisions while flooded with anger they often wonder, “What was I thinking?” The fact is they probably weren’t thinking anything because the anger shut down their frontal cortex throwing rational thought out the window.

In the context of relationships, anger can be very harmful. Even if the anger is caused by some factor outside of the relationship if not recognized and resolved it will eventually manifest itself within the relationship. 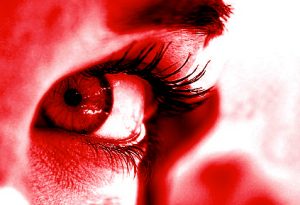 Most police officers hate responding to domestic disputes. The reason for this is that it is very common for one of both of the fighting people will turn their aggression towards the officers. Their anger is displaced on a new target when it enters the hostile and high energy situation.

This is similar to bulls “seeing red.” Bulls are actually color blind. What is really going on is that the bulls are poked and prodded before the fight putting the bullfighter in a position to use the bulls anger. Really all the bullfighter is doing is getting the attention of the already angry bull. He makes himself a target for the bull who is flooded with cortisol and norepinephrine. The bull in a state of “fight or flight” instinctually attacks the bull fighter in an attempt to resolve the anger.

In the context of relationships and anger, dealing with the anger is paramount before open communication can be restored. It’s better (and easier) to prevent the wall from coming up rather than trying to break through it. However, sometimes prevention is not possible and “in vivo” (in the moment) intervention is necessary.

When people are angry even though it is difficult to “think straight” four predictors of conflict derailment should be kept in mind. They are based on relationship expert John Gottman’s research.

These guidelines help communication to stay open and allow everyone’s PERSPECTIVE to be validated. If these guidelines are violated intimacy suffers making it that much more difficult next time to communicate openly and manage anger effectively.

IQ vs EQ – What is Emotional Intelligence?